WUSME at Webinar: “The fate of MSMEs during the Pandemic”

WUSME at Webinar: “The fate of MSMEs during the Pandemic”

WUSME took part in the Webinar entitled “The fate of MSMEs during the Pandemic” in Indonesia held on March 23th, 2021 and organized by Desapedia and TV Desa.
Ms. Nukila Evanty, WUSME Member of the Permanent Commission on Social Issues and Women Entrepreneurship, attended the virtual event on behalf of the Union of Small and Medium Enterprises and Crafts. The objectives with which the Webinar took place were two. The first is to build a network between the parties, both from the Micro, Small and Medium-Sized Enterprises themselves, government stakeholders, the private sector who are jointly working to build the resilience and sustainability of MSMEs according to their respective capacities. While the second, to formulate the urgency to strengthening MSMEs in pandemic conditions. 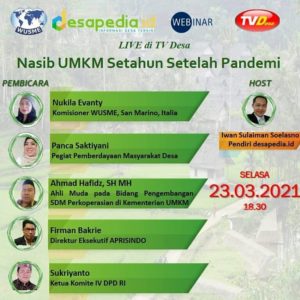 Among the speakers, Ms. Nukila Evanty indicated some forms of intervention useful for assisting MSME affected by the pandemic through the adoption of appropriate, fast and accurate policies. A first action is to offer credit assistance on a large scale, through a mechanism providing convenience and credit easing by conventional banking institutions to fintech and financial technology.
The second action consists in implementing a special assistance program to open up new markets for MSMEs, also referring to the experiences of other countries facing cases similar to Indonesia.

During the event, the speakers highlighted how MSMEs have a very important role in Indonesia as a means of reducing poverty and balancing the level of the economy. At the same time, the natural disasters to which the country is frequently subject and non-natural disasters such as the Covid-19 pandemic, have an immediate impact on the workers and owners of MSME: damage to the workplace, loss of resources, raw materials, cessation of production and consequences related to long-term job losses. While after some time, the MSME sector runs into obstacles to continue its activity and the worst result will concern the economic conditions and social instability of the country. 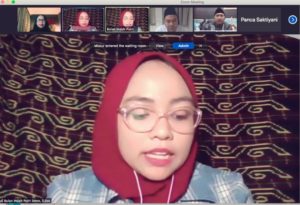 Consistent with its mission, WUSME offers its support and constant commitment to the development and cooperation of Small and Medium Enterprises and Crafts, engine of the economy, and sector that is suffering most from the crisis caused by Covid pandemic.

Why is IP protection important for EU SMEs?

May 20th, 2021 – WUSME Association wishes to remember its President Gian Franco Terenzi, who died suddenly a year ago. Under his leade...

WUSME, mission in the Republic of...

MADAGASCAR – Last February 2021, as part of a mission carried out in Madagascar to explore investment opportunities, WUSME Ambassador ...

50th Anniversary of the Official Relations...

REPUBLIC OF SAN MARINO – May 6th, 2021 – As part of the celebrations for the 50th Anniversary of the Official Relations between ...

Nearly 60% of SMEs in Latin America led by women

WUSME, mission in the Republic of Madagascar